This year’s DOAG excibition + conference is over, and it was a blast in many ways.

I can’t say much about the overall quality, topics or audience because I’m lacking comparison data (I’m still very much a conference newbie), but from my point of view it was an extremely well organised and executed conference.

Therefore, I will also focus on my very personal experience and share some thoughts.

When I had my first public talk ever last year at the same conference, I attended a lot of talks every day – partly because I didn’t know the people, partly because I had “just” one talk and was already very well prepared.

This year was very different, because I had a packed schedule:

I’m a person who likes to be very well prepared, so especially things like non-rehearsed interviews and relatively spontaneous speed-sessions are a challenge.

Don’t get me wrong – I don’t complain at all. I really enjoyed every single event, I learned a lot and hope I could also give some helpful answers and thoughts, but being on high adrenaline during all 3 days made them very much swooshing by. I was seriously surprised when I woke up and realised that it’s already thursday morning and I’d be heading home in a couple of hours.

I also tried to be in all the talks about testing that I featured before and tweet about it – which I didn’t manage to do in the end. Another thing I learned: Live-tweeting a talk is pretty exhausting – kudos to the people who do it regularly!

Of course I also attended some great talks, but it was a very different experience and I might learn for future events to not have as many points on my schedule – or to expect the consequences in advance.

The people – old and new friends

The second thing that was very different this time was the fact that I already knew a bunch of people personally or at least via Twitter.

One would probably expect to talk and meet an immense amount of people at a conference with 2000 attendees, but in fact I had only a couple of folks I hang around with most of the time. I guess the bigger a conference, the more “bubbles” exist inside and probably the less pervious they become.

I experienced these bubbles several times during the conference – whole groups of folks who had a completely different focus, completely different highlights, hopes and needs, who stayed together in their own small community inside the masses. And of course I was part of such a small bubble myself, highly focused on utPLSQL and testing topcis but also tied to the people I already knew. This might be a natural part of conferences, but I will think about how to lower the barriers for people who might be new and somewhat lost like I was myself a year ago.

Nonetheless I had some very enjoyable chats with old friends and also made a couple of new ones.

I especially enjoyed meeting and chatting with people I only knew from Twitter so far, for example Kim Berg Hansen, who taught me a lot about Danish beers and other stuff or Jan Karremans who finally explained to me how Postgres and EDB are connected.

And then there was A3-LPC. It started as a joke in my office, and my dear friend Ben kept putting them into by bag, so I took them with me.
They got their own badge very quickly and managed to sneak into many talks and pictures. It was extremely funny to watch a joke becoming something different, creating a lot of joy for the people involved.

Just look at the Twitter-Moments.

The Message – Tech, Testing and Life

While utPLSQL was relatively unknown last year, when I asked the ~180 people who attended my talk who didn’t know utPLSQL, only 5 or 6 hands were raised.

I chatted with a couple of people who all were very interested in automated testing in the database world or are even already doing it.

Even the PL/SQL community meetup, where the topic was set to “Open Source”, turned into an active disussion about testing, QA-mindset, where to start with unit-testing and challenges we face in the database world.

I am very happy about these events, because I believe that the database development community can benefit so much from the techniques and mindset we have in different communities for nearly 20 years already. And of course, utPLSQL and the immense work Jacek, Pavel, Lukasz, Philipp and the other contributors invested plays a big role in these changes.

There was another new thing. While I’ve always been very open about my “political” views and even had a lightning talk at ApexConnect about a less development-centered topic, recent events in Germany (and worldwide) have made me increasingly worried.

It even seems that a lot of people haven’t learned anything from the horrible things that happened during the Holocaust and how this was even possible to happen.

I hate to use the word “politics” in this context, because we are talking about life-threatening, deadly things and not about something where one could find a “compromise” or make a “political deal”. The rise of parties like the German AfD, the increasing normalization of hateful, dehumanizing language, the growing death- and rape-threats towards people who call out and explain right extremistic actions and movements: All these events made it clear for me that being silent will make me complicit, will actually enable and allow the hate spread by these actors.

And therefore I added a small part with a very clear “political” statement into my talk, knowing that some people will not like it and will probably tell the old and wrong narrative of tech not being political. It is.

It was one of my happiest moments at that conference when I got spontaneous applause for this statement.

We people in tech are a very, very privileged group. We can use it to be anti-racist and anti-fascist – or we can stay silent and allow a bunch of hate-powered people to push their deadly, catastrophic agenda.

Tech is not neutral. People in tech are not neutral. It’s time to stand up for life, it’s time to be loud and open about it, that people who question the right of existance for some folks have no place in our communities.

It’s also time to stand up for saving our environment, so now is a good time to check out the winner of this year’s DOAG Projektpreis:

FABE. For all, a beautiful Earth. 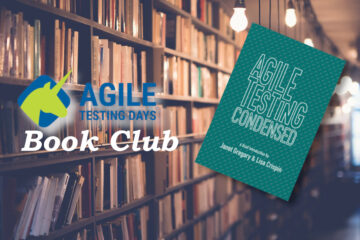 After the fabulous ATD 2021, I wanted to stay in touch, and one idea was to start an Agile Testing Days Book Club (ATDBC). The first book we're reading is "Agile Testing Condensed" by Lisa Crispin and Janet Gregory. Here's Part 1

We constantly predict what will happen or what consequences our actions will have, but do we really evaluate the outcome of our prediction and explore the reasons why we were wrong?

♠ Oracle ACE – what it means to me

I'm now an official Oracle ACE, which means a lot to me. What it means and what it does *not* mean is what I want to share in this post.